The Rhine-Rhône high speed rail line is the first line in France that enables interprovincial high speed linkages that do not pass via Paris. The line enables two types of passenger flows: West-East from Paris to Mulhouse and on to Switzerland and southern Baden-Wurttemberg, and North-South from Germany and Luxembourg to the Mediterranean passing through Strasbourg, Alsace and Burgundy-Franche-Comté. 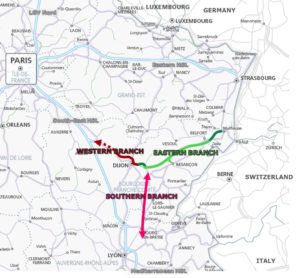 Map of the three branches

The Rhine-Rhône HSL takes the form of a star network with three branches:

For essentially economic reasons the three branches could not be built simultaneously, hence the decision to phase the construction of the line, focusing initially on the Eastern Branch which comprises the common trunk for the two other branches. Nonetheless the project has always been considered as a whole, with each branch being equally important regardless of which stage they have reached.

The principal socio-economic benefits of the Rhine-Rhône HSL come from the development of rail passenger traffic along the north-south axis between Luxembourg, Germany, Switzerland, and Lyon and southern France. It is this traffic in particular that is considered to have the greatest potential given the similarities in economic and industrial activity along the Rhine-Rhône Basin (automotive, pharmaceutical, biochemical, micromechanics etc). 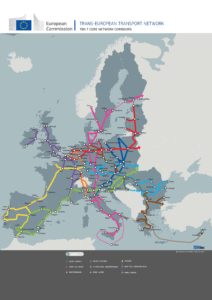 The European value-add of the Rhine-Rhône HSL is recognized in its inclusion in the core network of the Trans European Network for Transport. The Rhine-Rhône HSL is identified as a priority project on the North Sea Mediterranean corridor, to be completed by 2030, which makes it eligible for funding from the Connecting Europe Facility. It addresses a missing link on the Brussels-Luxembourg-Lyon rail axis and its completion will enable modal shift from road to rail, improvements to cross-border connections and reduction of bottlenecks in major railway hubs, notably Mulhouse.

The Eastern Branch was divided into two phases to spread the financing over time:

After a 5-year construction period the first phase of the Eastern Branch entered service on 11 December 2011 and today carries approximately 10 million passengers per year. The project cost of €2.3 billion was funded by 16 local authorities in eastern France (28%), the French government (32%), Réseau Ferré de France (28%), the Swiss Federal Transport Office (3%) and the European Commission (9%).

The commissioning of the 1st phase of the Eastern Branch has not however allowed the infrastructure to provide all the functionalities originally intended. As such the service offering is erratic, notably on the North-South route with limited connections between stations on the route and significant gaps in the timetable at certain times of the day. Business customers are not easily able to complete return trips within the day between main destinations and as such private vehicles continue to capture most of the market for travel on the North-South route.

The construction of the second phase of the Eastern Branch to complete the project is therefore indispensable if the full benefits of the infrastructure are to be gained. The second phase will allow further time gains for North/South traffic, better insertion of traffic into regional and international networks, improved connection times in the major railway hubs, increased connections with international destinations and major airports such as Frankfurt, Zürich and Basel-Mulhouse, and a better structured and more coherent service offering for all stations along the line.

2nd phase of the Eastern branch

As funding constraints are the primary reason for the French government’s decision to postpone the project, regional and local authorities have been working to find solutions to help overcome these constraints. Optimisation studies undertaken in 2016 have enabled the cost of the eastern section to fall to less than 700 million euros and the cost benefit analysis completed in 2018 shows the project has a positive NPV with an NPV to cost ratio of 10%.

In light of these findings the French Minister of Transport announced in 2019 that the timeframes for the construction of the second phase of the Eastern Branch would be reviewed with an objective of including the project in the infrastructure plan for 2023-28.

The Western Branch connects the Eastern and Southern branches of the Rhine-Rhône high speed line to the Paris-Lyon high speed line near Montbard. It passes through Dijon and involves the construction of a new high speed station within the city. The project will reduce travel times between Dijon and Paris to around 1h20 and further improve connections to Switzerland (Basel, Berne, Zurich, Neuchâtel and Lausanne) and southern Germany.

Various studies conducted since 1995 have enabled a preferred option to be determined for the rail path through Dijon and for the siting of its new high speed station. Three options for the section to the north-west of Dijon have been identified and were due to be submitted to public consultation in 2010. However the government infrastructure review of 2013 recommended the postponing of the Western Branch until after 2050 and called for the project to be redefined in its current form.

The Southern Branch is a 157km section of new high speed line linking the Eastern branch of the Rhine-Rhône high speed line to the centre of Lyon and to its airport, and on to the Mediterranean via the South-East High Speed Line. Three new high speed stations are planned, near Dole and Bourg-en-Bresse, and between Louhans and Lons-le-Saunier.

The Southern Branch represents a strategic rail link between northern Europe and the Mediterranean and as such it is identified as a key section of the core network of the Trans European Network for Transport, to be completed by 2030. The project will significantly reduce journey times between the Grand Est and Auvergne Rhône Alpes regions with a target time of 2h16 for travel between Strasbourg and Lyon. It will also contribute to the development of rail freight traffic by freeing up capacity on the existing rail lines between Dijon and Lyon and to the robustness of the high speed network by providing an alternative path from Paris to Lyon via the Western Branch of the Rhine-Rhône High Speed Line.

Studies conducted subsequent to public consultation from 2000 onwards enabled a preferred path to be identified and this has been submitted for ministerial approval. However, as for the Western Branch, the infrastructure review of 2013 recommended construction to be postponed until after 2050 and for the project to be to be redefined in its current form.

No widgets added yet.
Haut